KUALA LUMPUR, 10 December 2020 – The Malaysia Healthcare Travel Council (MHTC) today celebrated members of the media at its annual Medical Travel Media Awards (MTMA) that serves to recognise outstanding reports and articles by journalists, editors, producers, and media organisations for their contributions in promoting Malaysia’s medical travel industry. MTMA2020 shone a light on the dedication by both local and international media despite the constraints presented by the pandemic.

“This year’s Awards celebrates the contribution of the media as frontliners in their own right. The media are a vital source of information and have never ceased to serve the public by educating and keeping us informed during these times of crisis. Through all these, they have even continued to be advocates for Malaysia Healthcare as a platform to showcase our achievements in the global medical travel landscape. We are truly grateful for their unwavering support,” said Sherene Azli, Chief Executive Officer of MHTC.

Commenting on the success of MTMA2020, Sherene said the secretariat had received up to 400 submissions from 11 countries in addition to Malaysia, such as Indonesia, Brunei, Cambodia, Bangladesh, South Korea, China, Vietnam, India, the UK, Croatia, and Tunisia. The number of submissions marked an increase of 60% from last year.

“This year, the judging process was quite a tedious one, not only because of the increase in the number of submissions. Due to the excellent quality of the submissions themselves, we were left in a tough spot deciding the winners,” Suhaimi commented.

This year, MTMA2020 crowned nine winners, one each for international and local media, in
five categories:

One of the main criteria in making headway to winning the titles was the shareability/reach of the articles on social media – a key tool in promotional activities. The winners were also judged on the research quality of their reports, their chosen approach in presentation and technique, creativity, the headline, as well as the content of the report. 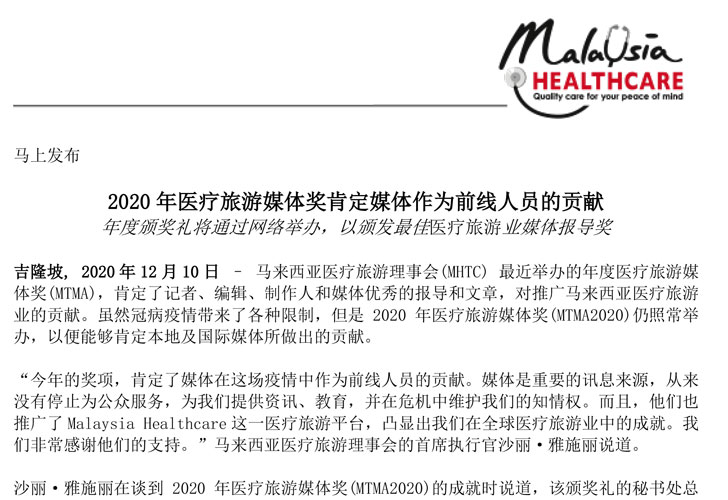 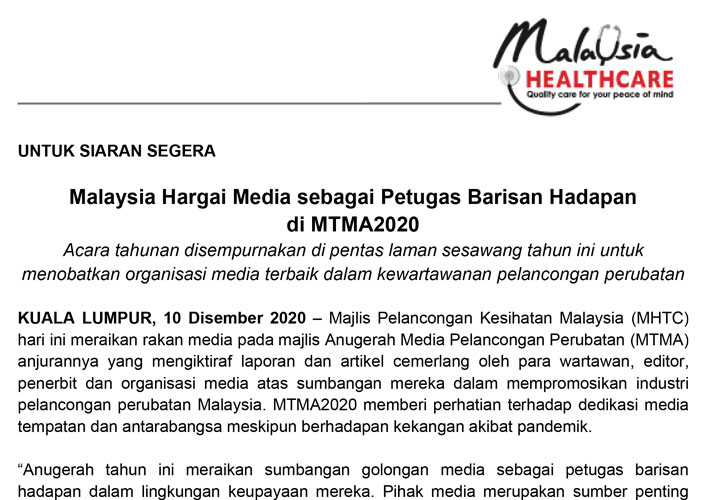