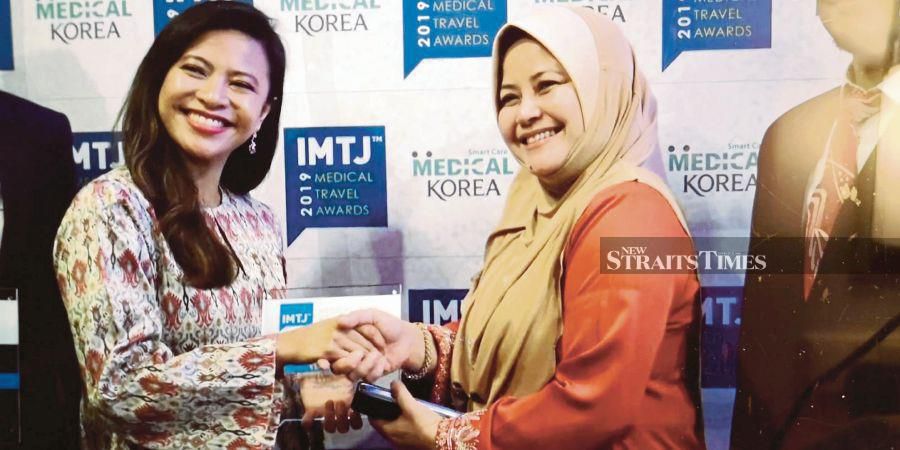 BERLIN: It was a proud day for Malaysia at the International Medical Travel Journal Awards 2019 (IMTJ) as it bagged four medical travel awards at the closing of a two-day conference here on Tuesday.

While the Malaysia Healthcare Travel Council (MHTC) maintains a firm grip on the Cluster of the Year Award for the third successive year, it also received the Highly Commended Award for Destination of the Year for Health and Medical Tourism.

Winners were chosen by a panel of 20 international judges.

Sherene, who enjoys a high-profile presence on the medical travel circuit, was pleased that since 2015, MHTC had maintained its hold in the Cluster of the Year Award.

The award is given for “unparalleled qualities in organising, managing and stewarding medical health organisation or enterprise under its umbrella”.

“This is something that we should be proud of as we have been recognised as the outright winner this year,” she said after the ceremony.

“All players in Malaysia’s healthcare travel chain have poured in much effort to provide the highest quality in patient experience and have earned the trust of many over the years.

“We hope to improve our service delivery to healthcare travellers, especially for the Malaysia Year of Healthcare Travel 2020 (MyHT2020).”

Malaysia lost in the “Destination of the Year” category to South Korea, which it had won last year. Malaysia had won the award three years in a row, in London, Madrid and Opatija.

This year, Malaysia was pitted against the Korea Health Industry Development Institute and the Dubai Health Authority.

Pollard said: “All three are outstanding destinations in the world.

“It was a close finish. Malaysia, which came second, gets the Highly Commended award for Destination of the Year.”

Indeed, hailed as the “Hidden Jewel of Asia”, Malaysia, according to the IMTJ booklet, has risen to become one of the leading healthcare travel destinations in the region.

Taking the award for the “Fertility Clinic of the Year” category for the fourth year, Nadiah said her hospital was supportive of MHTC’s efforts to market Malaysia as a fertility hub in Asia.

She said health tourists for fertility facilities at TMC were mainly from Indonesia, although there had been an increasing number of visitors from China each year.

“Malaysia can market the fertility treatment in Southeast Asia. As the biggest provider of this treatment in Malaysia, we are proud of MHTC’s efforts.”

Shi said TMC was proud to receive the Best Quality Initiative Award, as it was pitted against other hospitals in the world.