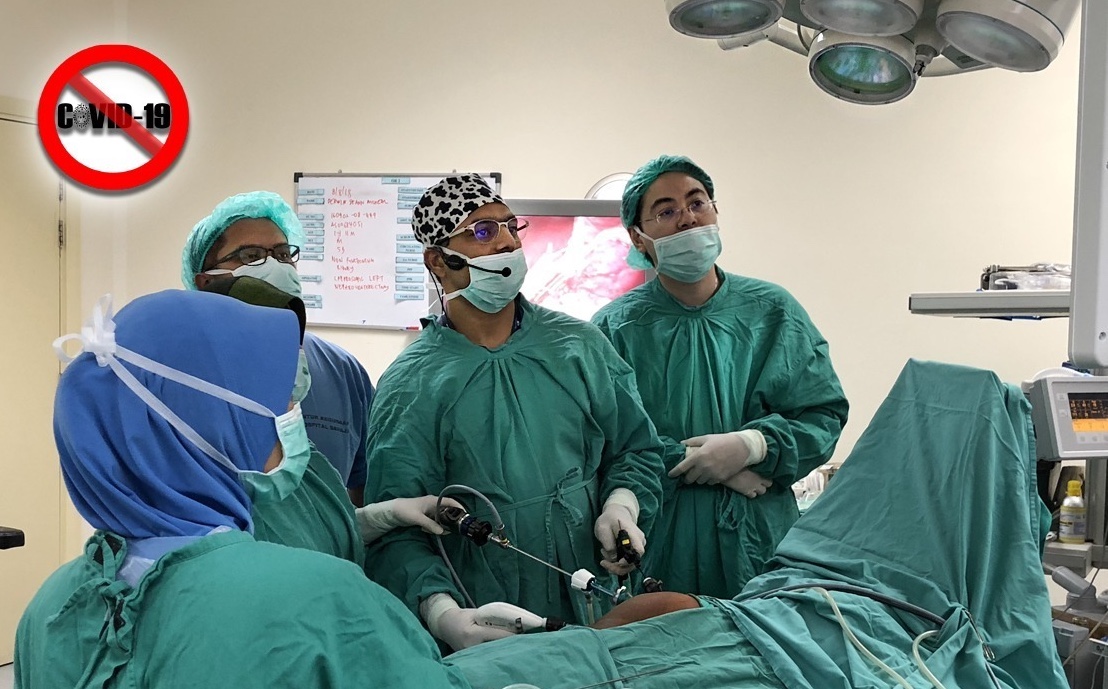 Malaysia is among the top-notch destinations for medical tourism in the world and its healthcare and medical services have won global recognition. This second of three articles zooms in on Malaysia’s expertise in keyhole surgery.

KUALA LUMPUR (Bernama) – When Elvan Keano Manurung, who is from Medan, Indonesia, was five months old, he often came down with a fever, coughed endlessly and had trouble breathing.

His mother Lista Hariyanti Siregar, 33, took him to various doctors in Medan for treatment and they would prescribe antibiotics and medicines for the fever and cough.

When the child’s condition became worse, a CT (computer tomography) scan was done and it revealed that a number of cysts had formed on his right lung tissue. Little Elvan was diagnosed with congenital pulmonary airway malformation (CPAM) and surgery was the only treatment option.

“We were told that there was a 10 percent risk of death as a thoracotomy has to be performed,” Lista Hariyanti said. (Thoracotomy is a surgical procedure that requires a six- to 12-centimetre incision to be made on the chest.)

She said her employer suggested that Elvan be taken to Malaysia for treatment “but I couldn’t possibly afford it as I work for an insurance company as a contract officer while my husband is a driver and our total income was only four million rupiahs (about RM1,124) a month”.

Elvan’s condition worsened in the meantime and he weighed only 6.4 kilogrammes when he was 11 months old, compared to babies his age who weigh between nine and 10 kg.

Lista Hariyanti, who has two other children, said her employer then suggested that she raise funds for her son’s treatment in Malaysia through social media platforms such as Facebook, Instagram and Kitabisa.com.

She did just that and in one month managed to raise RM60,000 and on March 15, her son was admitted into Pantai Hospital Kuala Lumpur.

“I’m so glad we arrived just a few days before the Movement Control Order was enforced by the Malaysian government and it closed its international borders. I don’t know what would have happened to my son if our trip to Malaysia had been delayed,” she told Bernama, adding that she was keen to bring her son to Malaysia for treatment as she has heard of its world-class medical facilities and expertise.

Elvan, who turned one in April, was hospitalised for a month and treated by PHKL paediatric surgeon and urologist Dr Nada Sudhakaran who specialises in keyhole surgery for children.

From a skinny baby that struggled to breathe and could barely lift his head up, Elvan has now developed into a healthy and active toddler who can walk, run, laugh and play.

“Look at him now… he has gained weight and is like other children his age,” his happy mother told Bernama recently in a WhatsApp video call from Medan.

Elaborating on Elvan’s condition, Dr Nada said based on the child’s CT scan report, he had CPAM in the bottom part of his right lung which had many cysts, each an estimated three centimetres in size.

“The cysts are the accumulation of mucus which can expose the patient to various infections. Many complications can arise if the cysts are not removed, including a five percent chance of them turning cancerous because they are not normal cells,” he said.

He said the cysts can also lead to pneumothorax, a condition where air or gas fills up the space between the lungs and chest wall due to air leak from the lung.

“This can cause the lungs to be compressed and risks of mortality,” he added.

In Elvan’s case, he also developed tuberculosis as his condition had compromised his immune system. He had to undergo surgery to have the cysts in his lung removed and since his mother was not keen on open surgery, Dr Nada opted for keyhole surgery.

With 17 years of experience in keyhole surgery, a minimally invasive surgical procedure, Dr Nada’s expertise in this area is well-known and his skills are sought after by surgeons in the private and public sectors who wish to learn from him.

Explaining what keyhole surgery is all about, Dr Nada said it is very different from open surgery and is safer and less risky.

“For keyhole surgery on the chest, surgery is conducted using very small instruments of about three millimetres in diameter. A small opening is made to insert the telescope and to create space in the chest with gas so that there is more room for the surgery to be done,” he said, adding that two other miniscule incisions are made to insert instruments into the chest to conduct the procedure.

He said the video images captured by the telescope are projected onto a screen for the surgeons and their assistants to view.

“The enlarged visuals enable me to see the lung area more clearly. In Elvan’s case, about 25 to 30 percent of his lung that was affected by CPAM was removed,” he said.

Although the duration for keyhole surgery, particularly in the lung area, is 10 to 20 percent longer than conventional surgery, it has many advantages including a higher success rate, faster recovery, minimal scarring and lower risk of infection due to shorter duration of hospital stay.

Any surgery, whether it is open surgery or keyhole surgery, has its own risks, the common ones being bleeding and infection although quantitatively, the risk is minimal with keyhole surgeries.

“In keyhole surgery, for instance, there is no need to cut the muscles. Open surgery, on the other hand, involves cutting all the layers including the muscles and requires the surgeon to insert his hand into the problem area to conduct the operation. This type of surgery is more painful and the patient needs more time to recover,” he explained.

Dr Nada also said Malaysia has made much progress in the field of keyhole surgery and that its expertise and medical technology are sought after by medical tourists.

“Not all surgeons can offer keyhole surgery as it requires specialised skills to handle the miniscule instruments. But Malaysia’s expertise in this field is impressive and it’s our country’s speciality,” he added.